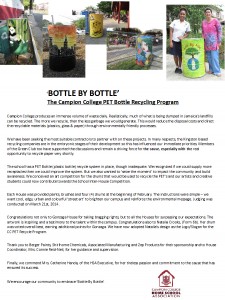 Campion College produces an immense volume of waste daily. Realistically, much of what is being dumped in Jamaica’s landfills can be recycled. The more we recycle, then the less garbage we would generate. This would reduce the disposal costs and direct the recyclable materials (plastics, glass & paper) through environmentally friendly processes.

We have been seeking the most suitable contractors to partner with on these projects. In many respects, the Kingston based recycling companies are in the embryonic stages of their development so this has influenced our immediate priorities. Members of the Green Club too have supported the discussions and remain a driving force for the cause, especially with the real opportunity to recycle paper very shortly.

The school has a PET Bottle (plastic bottle) recycle system in place, though inadequate. We recognized if we could supply more receptacles then we could improve the system. But we also wanted to ‘seize the moment’ to impact the community and build awareness. We conceived an art competition for the drums that would be used to recycle the PET’s and our artists and creative students could now contribute towards the School Inter-House Competition.

Each House was provided paints, brushes and four (4) drums at the beginning of February. The instructions were simple – we want cool, edgy, urban and colourful ‘street art’ to brighten our campus and reinforce the environmental message. Judging was conducted on March 21st, 2014.

Congratulations not only to Gonzaga House for taking bragging rights, but to all the Houses for surpassing our expectations. The artwork is inspiring and a testimony to the talent within the campus. Congratulations also to Natalia Crooks, (Form 6b). Her drum was voted overall best, earning additional points for Gonzaga. We have now adopted Natalia’s design as the Logo/Slogan for the CC PET Recycle Program.

Thank you to Berger Paints, Shirlhome Chemicals, Associated Manufacturing and Zep Products for their sponsorship and to House Coordinator, Mrs. Connie Reid-Neil, for her guidance and supervision.

Finally, we commend Mrs. Catherine Handa, of the HSA Executive, for her tireless passion and commitment to the cause that has ensured its success.